This is a quick post about a fossil hunting trip I made to the Martin Marietta Berkeley County Quarry (now closed) in South Carolina back in 1994.  This quarry was one of the biggest sources for mined limestone in the S.C. Low country and, oh by the way, the very best example of Middle to Late Eocene marine stratigraphy exposed in South Carolina.  It is well known for its fossil bryozoa, molluscs, echinoderms, brachiopods, crabs, and whales.

The Middle Eocene was a critical period in the evolution of whales.  At this time we are seeing the very earliest fully marine Cetacea evolving from forms that spent more time on land than they did in the oceans.  The Protocetids still had vestigial hind limbs that their ancestors had used to move around freely on land (think about hippos).

At the time that I discovered these three teeth, they were thought to be the same species as the then newly discovered Georgiacetus, and were the subject of a paper that was published in the Journal of Paleontology in 1996 by Barry Albright.  The teeth are now deposited in the Charleston Museum (S.C.).  Subsequently, in a paper by Jonathan H. Geisler, et al, published July 25, 2005 in American Museum Novitates (published by the American Museum of Natural History), these teeth were referred to the new species Carolinacetus gingerichi.  The identification was based on a partial skeleton (including a partial skull, the rear portion of both dentaries, 13 vertebrae, and elements of 15 ribs) that was found in the same quarry by another volunteer from the Charleston Museum about the same time as my teeth. 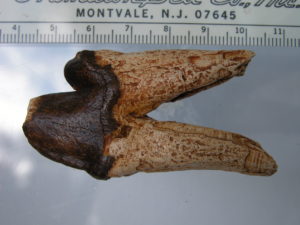 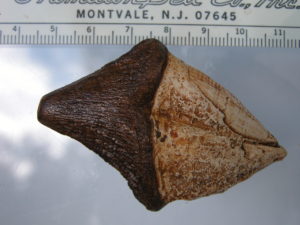 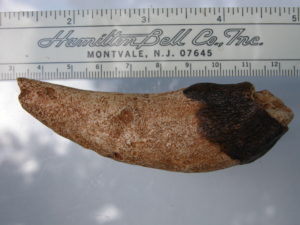 I later found a single vertebra from a different part of the quarry, which I believe is the right size to also be from Carolinacetus.  I will share more about this quarry in later posts. 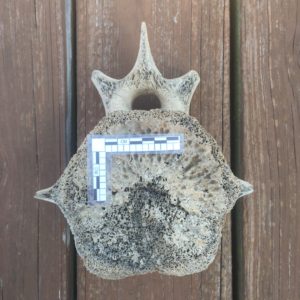 What’s my genus?
So you think that trilobite is rare?

One thought on “A Protocetid Whale from South Carolina”