This is the second part of a multi-part blog post about my fossil hunting adventures in Independence, KY. This one is about what I call Site #2.

I stumbled on a patch of brown shale that had some unusual texture. In only a few minutes time, I found what I call an “Ordovician Gulf Ball.” (see the Dry Dredgers April 2003 field trip for an example.)  What I really found was a type of Ordovician Algae called Cyclocrinites darwini. 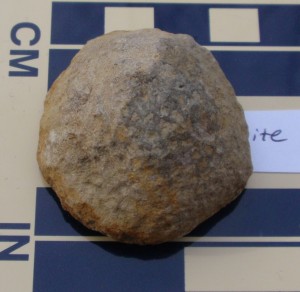 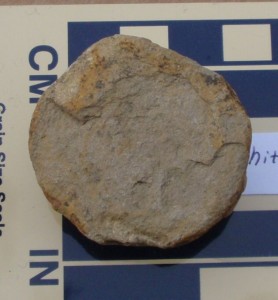 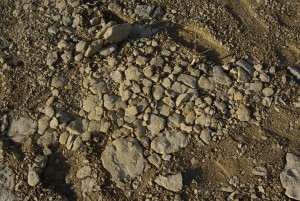 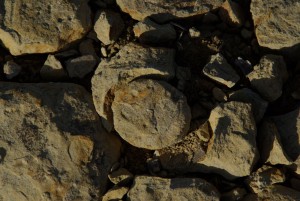 The cyclocrinitids appear to be weathering out of the unit with the convex dimpled side facing down. This is evident in the many examples of positives with negative impressions in the pavement. 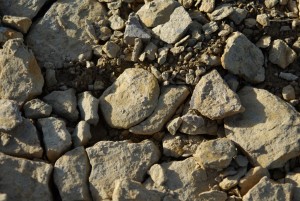 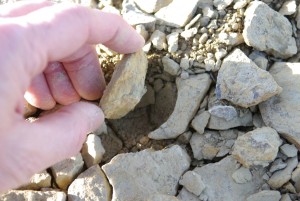 Some of them appear to be resting on dirt rather than rock. Was this once clay and the clay is now gone? (next 2 photos) 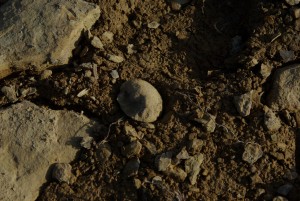 A key question is “why are cyclocrinitids not commonly found in the Corryville Formation when this site has clear evidence of them?” Since the specimens found in this layer seem to be with their convex dimpled side face down in the mud and the other side somewhat flat, they may not be noticable on an unbroken contiguous surface.

Another VERY knowledgeable and famous Dry Dredger suggests that this site is actually Arnheim Formation. I am still looking for evidence of that, but it changes the story of these algae if true. I had Professor Carlton Brett and graduate student Tom Schramm out to the site. They brought an altimeter and examined the site. They both felt that top of the Bellevue and bottom of the Corryville was plausible for this site.

Observe the photo below of a contiguous slab thought to be in the cited zone. The surface is pocked and rounded. Did cyclocrinitids rest in and on this surface? I think these slabs will need closer examination and some deliberate breaking and cutting to find the answer.

Associations and other clues to the formation:

It appears to be somewhere above the base of the Corryville based on the observed fauna. There were large numbers of the characteristic brachiopod species Rafinesquina nasuta. 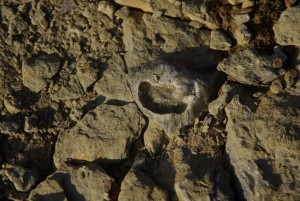 Not pictured but present were varieties of the Brachiopod Vinlandostrophia ponderosa pondersa (subspecies) and V. laticosta. These are not limited to the Corryville, but give a hint that the layer is not in the Arnheim formation. We did not find the Vinlandostrophia subspecies V. ponderosa auburnensis and so there is some evidence that we are not as high up as the Mt. Auburn.

Also not pictured, the clam genera Caritodens and Modiolopsis were seen.

An example of a complete molt of Flexicalymene meeki was found. 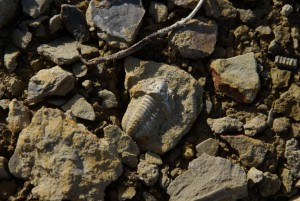 Among less diagnostic fauna was this unidentified crinoid stem (first pic) and a partial calx (second pic) on the rock surface to the right of the US quarter for scale. This specimen will need to be collected and prepared before it can be identified. It appears to be Cincinnaticrinus sp.. In the Flexicalymene photo above, in the upper right a crinoid stem can be seen. I did not notice that fragment while on the site, but a return trip will be needed as this stem looks from the photo like it could be Iocrinus.

The inarticulate brachiopods found included Petrocrania scabiosa resting on a mudstone (not pictured) and a also what looks like two Pseudolingula (below). 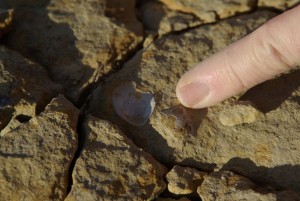 Below is a gallery of the specimens of Cyclocrinites I photographed that day. 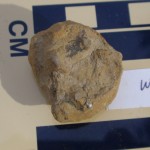 I've been fossil hunting since 1989 and an active member of the Dry Dredgers since 1991. The Dry Dredgers has had the biggest positive influence on my fossil hunting. What I have learned from my fellow members - both amateur and professional, has made a simple recreational hobby become both productive and much more enjoyable.
I am the developer of the Dry Dredgers website, drydredgers.org and our Geofair's website, geofair.com. I have been collaborating with professional paleontologists on several projects that have resulted in co-authorships in professional papers. I hope to describe these collaborations and some of my projects in this blog.