In the summer and fall, I went with two area clubs to collect the Devonian Silica Shale at the commercial rock quarry in Paulding, Ohio.  The two clubs were NCFC (North Coast Fossil Club — Cleveland area) and FUMMP (Friends of the University of Michigan Museum of Paleontology — Ann Arbor area).

On one trip, we were allowed to collect on a small shale exposure in the quarry itself.  For the other trip, we collected piles of shale that had been dumped onto a hill a few years ago – the quarry calls this the Rock Garden.  In spite of being weathered, partially overgrown with weeds, and picked over by many groups since being dumped, the shale still produced large numbers of brachiopods and horn coral.  Among the other fossils found there are small blastoids.

But I focused on trilobites, of course.  After all, Paulding is well known as a source of large Phacops (Eldridgeops).  On one trip I found a 2.5-inch prone specimen (exposed ventrally in a large chunk of hard shale).  On the other trip, I found three enrolled specimens – and traded for three more!  So, some fantastic collecting. 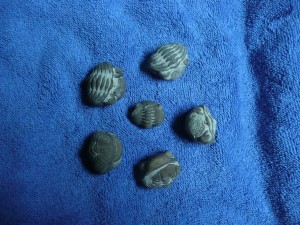 Thanks to the quarry management for their generosity in letting us collect there.  Looking forward to collecting in 2016.