In this post, I will share some of my whale finds from the late Oligocene Chandler Bridge formation from the Summerville, SC area (Chattian age – 27.5 Ma). The Chandler Bridge along with the underlying Ashley formation (Rupelian age – 29.2 Ma) make up the richest deposit of Oligocene marine vertebrates ever described. As I noted in my previous post, this fauna includes (in addition to the fantastic cetaceans) birds, crocodilians, turtles, sirenians, fishes, and an abundance of the teeth and dermal denticles of sharks and rays.

In the attached photos you can see various elements of the post cranial skeleton of some of the “primitive” Oligocene toothed whales (suborder Odontoceti, super-family Squalodontoidea) from the ChB. Most all of my skull material was donated to the Charleston Museum for their research into these animals, especially involving cranial “telescoping” (the movement of the nasal openings to the apex of the skull) and how it relates to the evolution of the odontocetes. The Oligocene is widely regarded as the period when these “primitive” whales were completing their evolution into the ‘modern’ forms of today. The sheer number and the excellent preservation of the ChB whales are allowing scientists to witness this evolution as it occurred in the mid and late Oligocene.

The first photo includes a section of the left mandible, two specimens of the tympanic bullae (back of picture), a beautiful and complete atlas vertebra, a cervical vertebra, 3 thoracic vertebrae and 2 rib sections. The second photo is a close-up of the cervical. The next photo shows some of the lower vertebrae. Photo 4 shows a close-up of one of these vertebrae which I removed from in situ in bed 2, with the neural arch (for the spinal cord) and the wing-like transverse processes still intact. Photo 5 is a group of loose teeth I have found over the years. Photo 6 is a close-up of the mandible fragment with 2 of the double-rooted molars still in place.  Photos 7 & 8 are molars. Photo 9 is a pre-molar, and 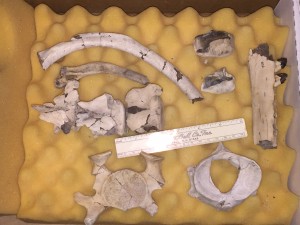 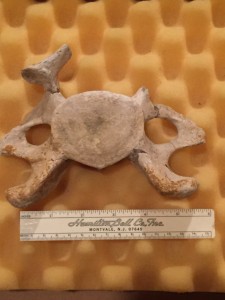 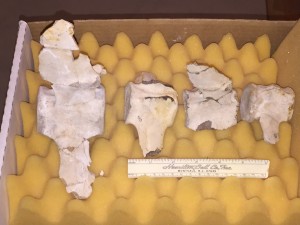 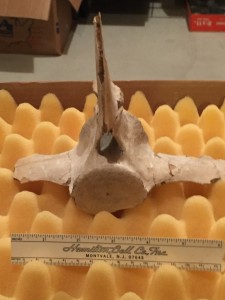 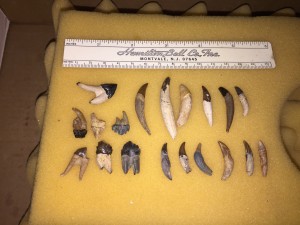 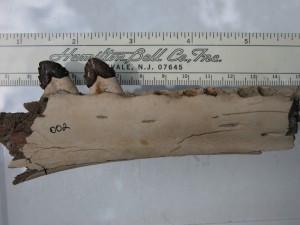 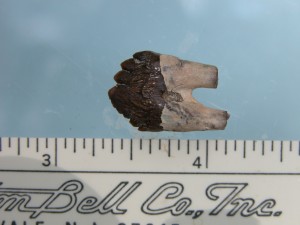 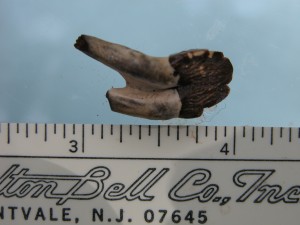 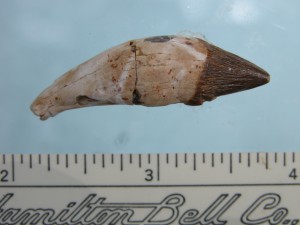 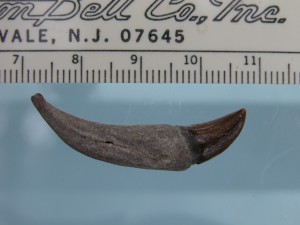