In the fossil community, there has been much discussion about the connection between amateur and professional paleontologists, especially in light of new legislation that may restrict amateur collecting opportunities on government land. This blog post will not venture into the debate about that, but rather will focus on a recent example of collaboration between amateurs (Dry Dredger members) and professionals. This example highlights the value to science of having amateurs in the field making paleontology discoveries and then sharing those with professionals.

In previous blog posts, I discussed two areas of collaboration with Dr. Carl Brett (UC) on material from the Massie Shale of New Point Stone in Ripley County, Indiana:

Recently, I returned twice to collect the Massie Shale. An objective was to collect more echinoderm columnals for Dr. Brett’s studies on parasitic borings. 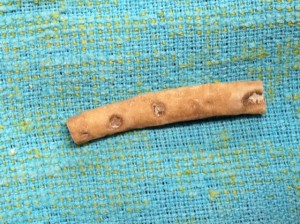 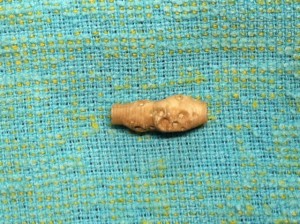 Echinoderm stem that is extensively bored.

On previous trips (accumulating approximately 2000 stems), I’d simply collected them from the quarry spoil piles, not differentiating what type of matrix they came from. On the recent two trips, I collected specimens into two separate categories: those from the limestone/bioherms vs. those from the shale. Dr. Brett plans to sort the columnals by species and then determine the occurrence, distribution, size, etc. of parasitic borings. Something to keep him occupied this spring.

Regarding cystoid holdfasts in the Massie Shale, there is a single exposure of them in the quarry, on a hard-ground ledge that has weathered for many years. On my most recent trip, I noted that this holdfast ledge was “under assault” by heavy equipment. While there is value in leaving a few of the holdfasts in situ for study in their natural environment, I feared they might be destroyed by the new activity. So I quickly re-located a few holdfasts (most likely Holocystites) discovered on previous trips and cut them out of the ground with a gas-powered cut-off saw (“rock saw”) to save them from certain destruction. These will be going to Dr. Brett for his study collection. 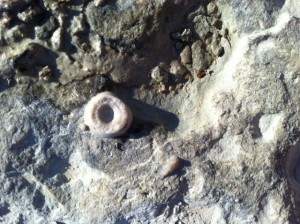 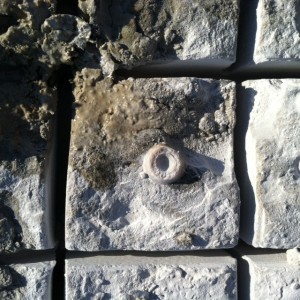 Cystoid holdfast after making cuts around it with rock saw. 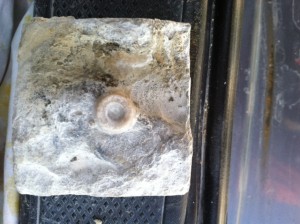 Cystoid holdfast after being chiseled from the ground.

The quarry has not opened any new Massie Shale exposures in a long time. Other than echinoderm columnals, the old spoil piles now only grudgingly reveal additional material with each rain storm. Hopefully a new exposure of shale will occur in the near future.

One thought on “Collaboration between amateur and professional paleontologists 4”