In the past couple of months, I made several trips to Indiana to collect the Silurian Massie Shale of New Point Stone in Ripley County.

One trip was with the North Coast Fossil Club (from the Cleveland area). We didn’t find a lot in the Massie Shale — the quarry has not opened any new shale exposures in a very long time. But I did fill a bucket with horn coral (!!!) from the Ordovician, which is exposed in the drainage ditches in the bottom of the quarry. [The horn coral were NOT for my collection — they were collected for someone else — REALLY — I haven’t abandoned my focus on echinoderms and trilobites.]

The NCFC folks were pleased with the trip. As a bonus, each one of them left with a prepped cystoid (Holocystites) from my stash. 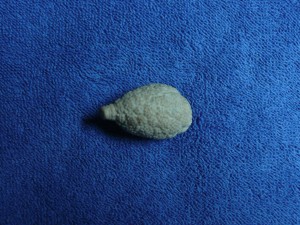 On another trip over there, I collected a bunch of Silurian echinoderm stem sections — YES, that was actually done intentionally. Dr. Carl Brett (UC) wanted specimens to examine for parasitic borings. A few of the 1000+ collected sections had obvious borings. As for the rest? Well, an interesting winter project for Carl to sort the stems by genus and then count bore holes. While I did not take a picture of the bored stem sections, I do offer a picture of a bored cystoid as an example. 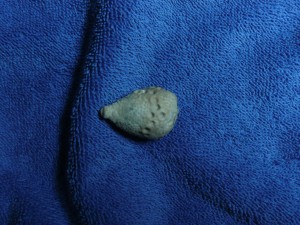 On yet another trip, I actually spent time looking for “the really good stuff”. Didn’t find a lot, but did manage to collect a nice 3-inch specimen of a rarer cystoid species: the large Triamara. In my 36 years of collecting this site, I’ve found perhaps two dozen complete theca of this genus — so not very common.

Since the exposed shale in the quarry has continued to decline in productivity this year, I hope that the mine operators expose a whole mess of fresh shale for next year’s collecting.