A new collecting season is here! And I’ve already returned to my all-time favorite site: the Silurian Massie Shale of New Point Stone in Ripley County, Indiana. [I’ve reported on this locality in previous Dry Dredger blogs, for example: http://www.drydredgers.org/blog/wp/2016/03/collaboration-between-amateur-and-professional-paleontologists-4/]

The collectable Silurian shale is on the spoil piles. While there are no new shale exposures in the quarry and no new rock has been added to the old piles in a very long time, weathering over the winter did expose a few specimens of the cystoid Holocystites — see the picture below — my most productive day in about a year. 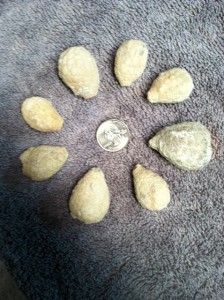 Holocystites found during most recent trip to Massie Shale.

Also exposed were specimens of two less common cystoids: three Caryocrinites and one Paulicystis.  Finding 3 Caryocrinites in a single day is most unusual — even finding one can be a challenge.  Paulicystis is also not a common find.  This genus is a favorite because I found (~1980) the first specimen ever reported — it has since been described in a publication by Harrell Strimple (University of Iowa).  This genus is notable for several features:

* the rectangular oral area with four ambulacral feeding grooves radiating outward [and therefore it had only 4 brachioles (arms) instead of the five and the pentagonal oral area found on most genera]. 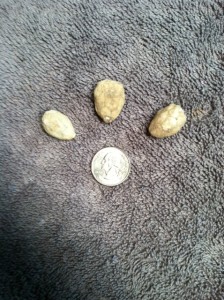 Caryocrinites found on most recent trip to the Massie Shale. 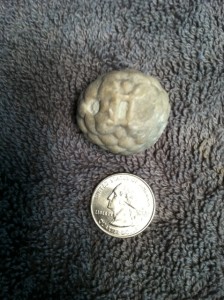 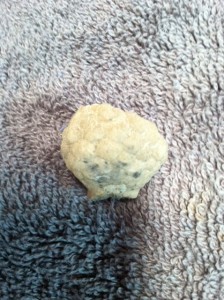 Side view of Paulicystis showing the squat mushroom-like shaped theca. 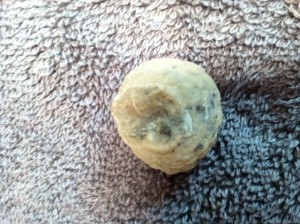 Bottom view of Paulicystis showing the large circular attachment base.

A fragment of a cylindrical Holocystites with many parasitic borings was found. This specimen will be of interest to Dr. Carl Brett (UC) for his studies on borings. And, as in several recent trips, I filled a bag with echinoderm stem sections for Dr. Brett’s studies. In a quick inspection of the collected material, I noted a few with parasitic borings (see picture below). I’m sure that he’ll find more as he sorts the stems by species and examines them more closely. 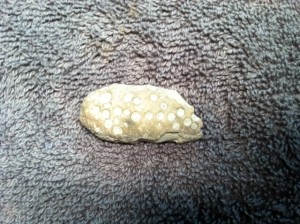 Fragment of cylindrical Holocystites species with many parasitic borings.

From the perspective of a fossil collector, the quarry continues to mine in the wrong direction. Based on our collecting success in the past, they should be mining toward the north and west — that’s where the “hot zone” was. But, alas, they are going east, into an area where even finding a brachiopod can be a challenge. I’ll continue to monitor the quarry for any new shale exposures — because they just might uncover another section with a high concentration of Silurian macro-fossils.