My first post is about a field trip I made to my favorite old fossil ditch while I was visiting family in Summerville, SC this past Christmas.  The site is a flood control ditch in my old neighborhood, and is a site I have collected nearly continuously for 30+ years.  Though only 6-8 feet deep, the ditch exposes 3 different formations.  The lowermost unit is the late Oligocene Ashley formation (ca: 29 Ma); overlying the Ashley is the later Oligocene Chandler Bridge formation (ca: 28 Ma); overlying the Chandler Bridge is the late Pleistocene Wando formation (ca: 100,000 years).  In the Charleston area, all of the other strata between the Oligocene and Pleistocene (with just a very few exceptions) were stripped away by Pleistocene seas; though we do find mixed Miocene, Pliocene and Pleistocene fossils in some lag deposits in the area.  The Oligocene strata are all marine origin.  The Chandler Bridge (first described in 1982) has yielded some of the finest shark, whale, turtle, crocodilian, sea cow, and marine bird fossils in North America.  The preservation of the Chandler Bridge specimens is amazing, and allows researchers to describe the fine detail of the numerous Oligocene whale skulls so far discovered, and add to the knowledge of this late group of mammals. 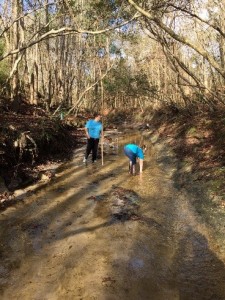 The ditch with fossils eroding out of the banks.

Most of these fossils are from the Chandler Bridge.  In the center is a tooth from a newly described Squalodontoid whale.  I have several skull caps and other skeletal elements on deposit from this and other new Oligocene whales in the Charleston Museum.  Also from the CBr are some teeth from the barracuda, Sphyraena; some stingray mouth plate elements; and the tip of a billfish rostrum.  The sharks’ teeth include, thresher, hammerhead, tiger, Hemipristis, and a rare tooth from the reef shark Carcharoides.

The larger tooth in this picture is about a 2” extinct mako from the Wando formation (reworked). 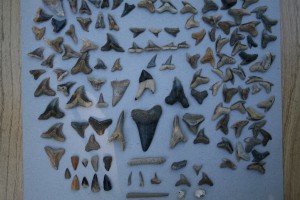 Also, on this trip, I found 2 smallish (2-3 inches) Carcharocles megalodon and 1 C. angustidens, the ancestral (?) Great White sharks.  I gave these to my fossiling partner that day (my 9 year old niece), so I don’t have pix of them.  I did include a couple of pix of some others from previous trips. These are the teeth that people come from all over the world to SC to find in sizes up to 7”.

Next post I will include a few more pix of the whale material we find in the Chandler Bridge.    Sammy