While outdoor field trips this time of year can be iffy because of the roller coaster weather, a dry place to collect is the basement (or garage, or shed, or….). Periodically, I mine my basement and garage, especially prior to a show, as I decide which specimens to take with me.

My current focus is on preparing for the 2016 MAPS (Mid-America Paleontology Society) Expo, which will be held Friday-Sunday (April 1-3) in Iowa City, IA (learn more at www.midamericapaleo.org). 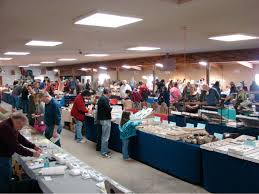 View of some of the booths at the MAPS fossil show.

Every year I go through the ritual of pawing through as much of my material as possible to pick what’s going to this fossils-only show. And every year, I never get through all of the piles. And that means there are pockets of material that have not been seen in years. Eventually, though, I do reach the bottom of every pile. SURPRISE!! “That’s a nice rock! I don’t even remember collecting it!”

For example, I found an unprepared enrolled Calymene (Indiana Waldron Shale) in a zip-lock bag. Didn’t remember that one. When prepped, it was fabulous. 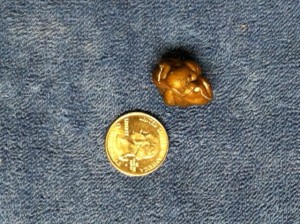 And a 4-inch shark tooth from South Carolina. I have collected in that state on several occasions, but don’t remember this particular specimen. So it must have been picked it up at a show.

C. megalodon from the Pliocene of South Carolina.

In my basement digging, I did relocate a 7.5-inch Montana ammonite that had eluded me for some time. I knew it was down there — just couldn’t find it — until this week. 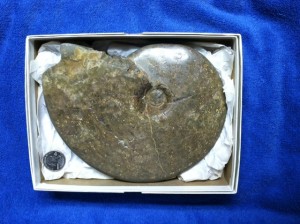 Placenticeras meeki ammonite from the Cretaceous Bearpaw Shale of Montana.

Then there was the time I found an egg carton containing twelve large enrolled Ohio Flexicalymene. Re-discovering Flexi in the basement is not anything particularly new for me. But surprisingly, these were all prepped! An unexpected discovery. 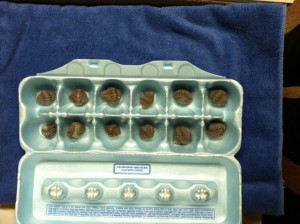 So, if the weather ain’t cooperating, check out your basement. There may be some long-forgotten gems down there.