In the fossil community, there has been much discussion about the connection between amateur and professional paleontologists, especially in light of new legislation that may restrict amateur collecting opportunities on government land. This blog post will not venture into the debate about that, but rather will focus on a recent example of collaboration between amateurs (Dry Dredger members) and professionals. This example, taken from an issue of the 2015 Dry Dredger bulletin, highlights the value to science of having amateurs in the field making paleontology discoveries and then sharing those with professionals and students.

Professor Marta Corbin teaches freshman geology at the university. A field trip location of interest is the New Point Stone quarry in Southeast Indiana. One Ordovician (Whitewater) and five Silurian (Brassfield, Osgood, Lewisburg, Massie, and Laural) formations are exposed there, permitting examination of stratigraphy, and collecting material for study and as teaching specimens. Since Tom and Don have collected this site for many years, and are familiar with some of the latest research done there by Drs. Carl Brett and James Thomka (University of Cincinnati), they were contacted by Professor Corbin to assist with the field trip. 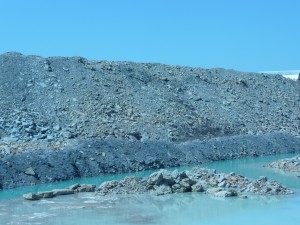 View of Ordovician (dark shale) in drainage ditch at bottom, with spoil pile of Silurian Massie Shale above.

In addition to Professor Corbin, eleven students plus Mudge Morris (a retired professor who was Marta Corbin’s mentor) and Kevin Goode (a colleague of Marta) participated. Four different levels in the quarry were visited to examine all six exposed formations. In addition to helping the group differentiate the formations, Tom and Don lead them to specific areas for collecting both Ordovician and Silurian specimens (brachiopods, corals, gastropods, bryozoa, cephalopods, cystoids, etc.). 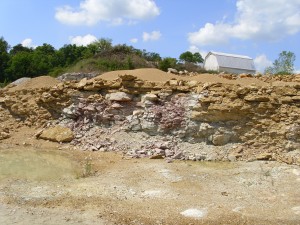 A popular stop in the quarry is a series of Ordovician sea stacks (the gray and purple rock) protruding into the golden Silurian Brassfield Limestone; the sea stacks are now gone having been blasted away as mining continues. 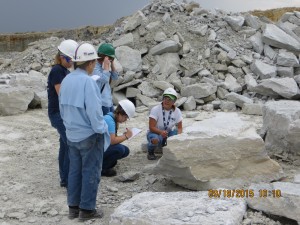 In 2014, these same two Dry Dredgers also assisted Professor Corbin with her geology class field trip to this quarry, and they plan to help if asked in the future.