In the fossil community, there has been much discussion about the connection between amateur and professional paleontologists, especially in light of new legislation that may restrict amateur collecting opportunities on government land. This blog post will not venture into the debate about that, but rather will focus on a recent example of collaboration between amateurs (Dry Dredger members) and professionals. This example, taken from an issue of the 2015 Dry Dredger bulletin, highlights the value to science of having amateurs in the field making paleontology discoveries and then sharing those with professionals and students.  This is the first in a series of blogs on this topic.

Dr. Mark Kleffner and student Parrish Gebhart from OSU at Lima and Professor Emeritus Stig Bergstrom are experts in using conodonts for stratigraphy studies. Conodonts, which occur in Precambrian-Triassic strata, are tiny phosphatic tooth-like structures that are believed to be part of the feeding apparatus of an extinct early vertebrate. While there is still much speculation and debate about the nature of the “conodontophorid” creatures, one thing is clear: they are extremely useful in stratigraphy. How so? Since their species populations were wide spread and changed in a predictable pattern over geologic time, defining the species of conodonts in a bedding plane permits correlating and establishing its relative age in comparison to other bedding planes. 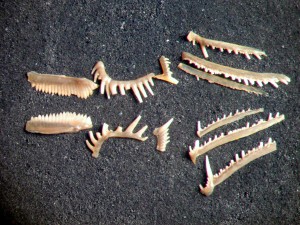 Picture of conodonts (each specimen is about 1 mm in length) 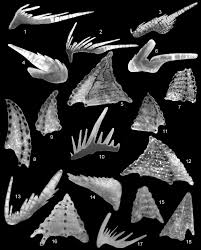 Picture of conodonts (each specimen is about 1 mm in length)

The OSU group is currently using conodonts to compare the Silurian Brassfield Limestones of Ohio, Kentucky, and Indiana. Specifically they want to determine if these limestones are indeed the same formation across the three states.

An excellent exposure of the “Golden” Brassfield (so named due to its sparkly yellow-orange color) occurs at the New Point Stone commercial quarry in Ripley County, Indiana. Since Tom and Don have collected this site for many years, Dr. Kleffner contacted them to help arrange a visit and to guide them to a suitable exposure in the quarry. 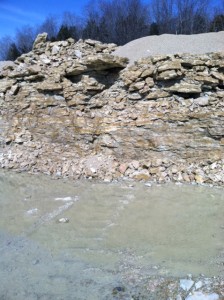 The collecting process involved marking half-meter vertical intervals in the 3-meter-high Brassfield exposure. Samples were then collected from the base and from each of the intervals (0.5, 1.0, 1.5, 2.0, 2.5, and 3.0 meters). This task was relatively simple due to extensive fracturing of the face of the exposure from blasting by the quarry operation, which mines Brassfield Limestone to crush into agricultural lime. Several kilograms of material from each interval were easily pried from the fractured wall.

Back in the lab, the OSU group will reduce the collected samples to particles small enough for microscopic analysis of the conodont species, and for isotope (carbon-13/carbon-12) ratio mass spectrometry to age the rocks. From this and samples collected from several other localities, they hopefully will soon learn if the Golden Brassfields across the Tri-State region are indeed the same formation.