Dating back to ~2003, a small group of Dry Dredgers has volunteered for the inaugural Dig with the Experts and the annual events since then at the Penn Dixie site. This year was no exception.

For those not familiar with the site, the Penn Dixie Fossil Park is located in Hamburg, NY. (Visit www.penndixie.org for more information about the fossils, nature trails, wildlife, and other events held at the park.) The Hamburg Natural History Society oversees the locality. Founded in 1993, the park is unique in that visitors are permitted to collect — and keep — all the fossils that they find! 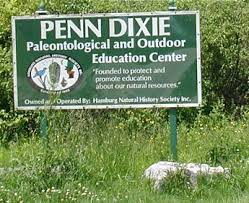 Sign outside the gate at the Penn Dixie site. 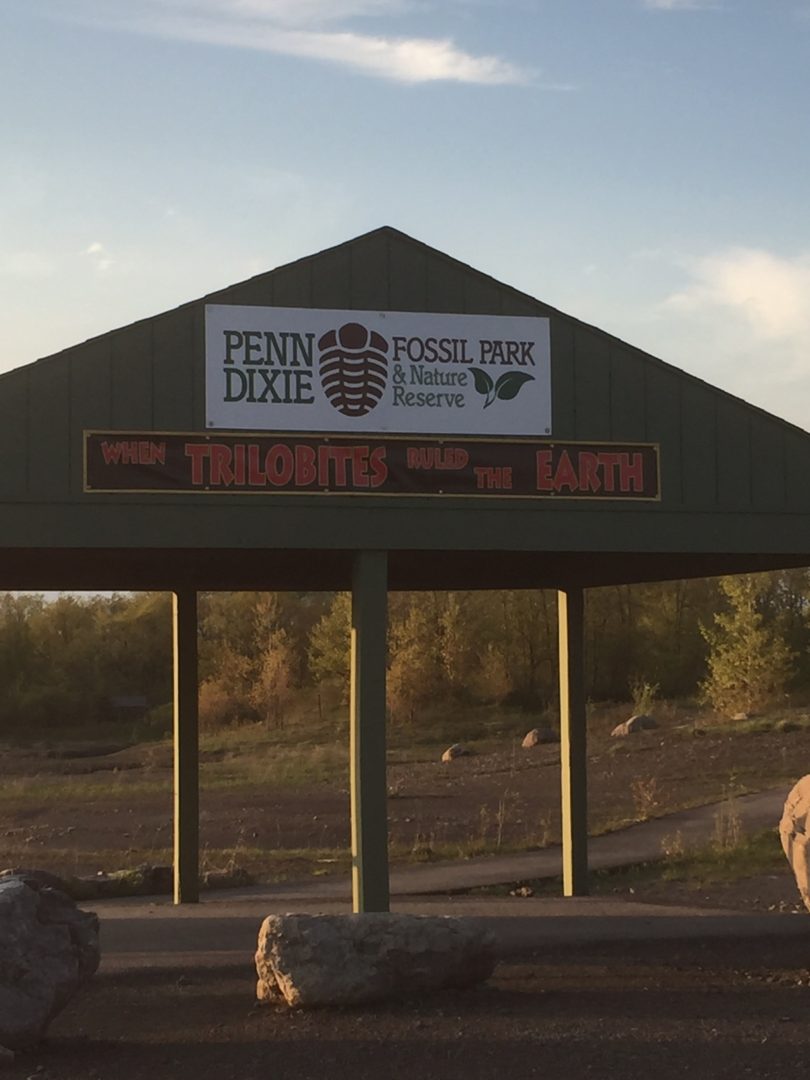 Sign inside the gate at the Penn Dixie site.

The specimens are Devonian (Windom Shale). A large diversity of material is found: abundant brachiopods and horn corals; occasional gastropods, cephalopods, ammonoids, crinoids, blastoids, carbonized plants, etc. But the most popular are the trilobites from a narrow band of Smoke Creek shale: Phacops (Eldregeops), and more rarely Greenops and Bellacartwrightia. And even more rarely seen is Dechenella. All are typically black against the grayish matrix. Here are two prepared examples of Phacops found on previous Digs. 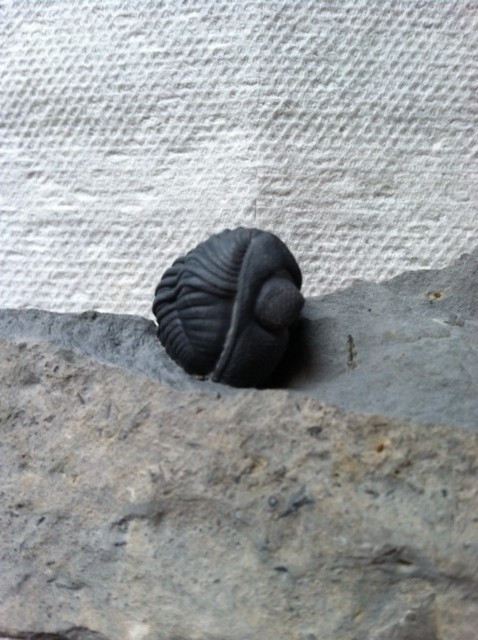 Enrolled Phacops (approximately the diameter of a quarter) from the Penn Dixie site.

Prone Phacops (specimen is 2 inches in length) from the Penn Dixie site.

The annual Dig with the Experts is held in May, this year on May 19-20. Prior to the Dig, an excavator (supervised by Dan Cooper) removed the over-burden to expose the trilobite-bearing layer, scooped out blocks of the rock, and placed them in piles for the Dig. Some collectors prefer to dig up their own blocks of rock in the pit for splitting. But most who register for the Dig take advantage of the piles of rock. 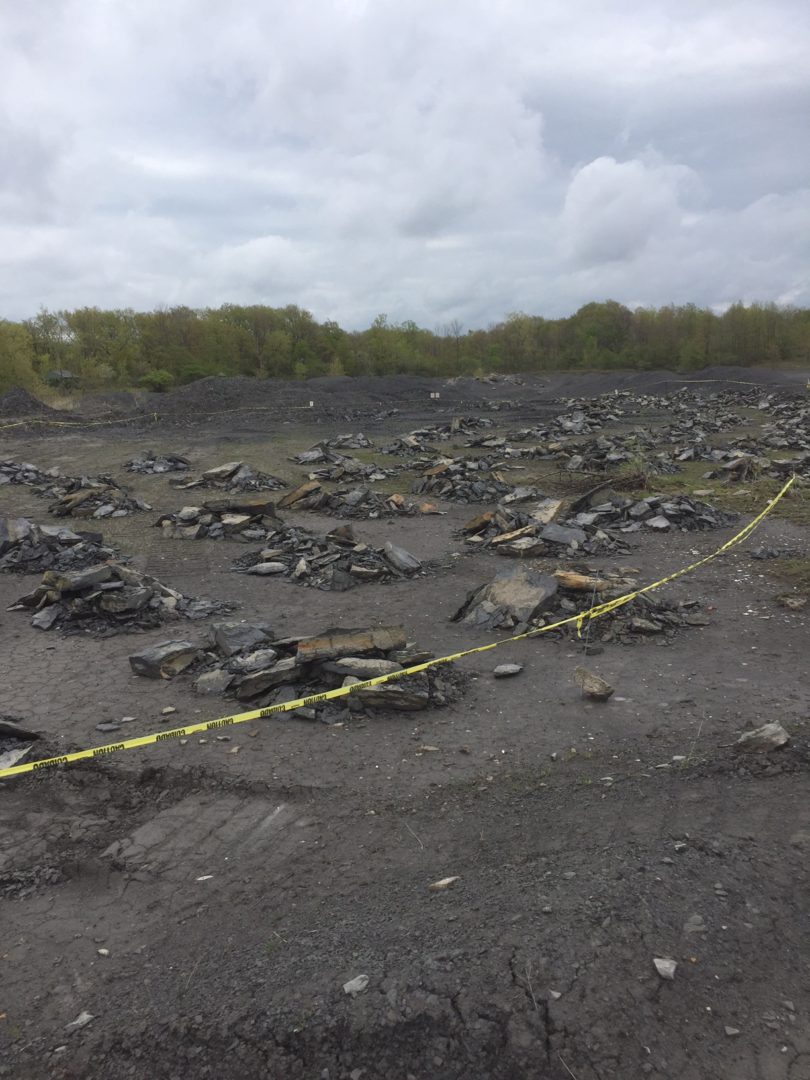 Piles of shale for splitting during the 2018 Dig.

Experts (those with extensive experience collecting the site) demonstrate splitting the rock, identifying what has been found, and trimming down rocks with a concrete saw to more portable sizes. The number of diggers participating this year was huge (the largest event to date): 200 on Saturday and another 200 on Sunday! There were plenty of blocks of shale available for splitting.  And several of the Saturday collectors returned to split more rock on Sunday. Many excellent specimens were found this year.

The experts also got to collect, when time permitted. One of my finds was a triple Phacops. 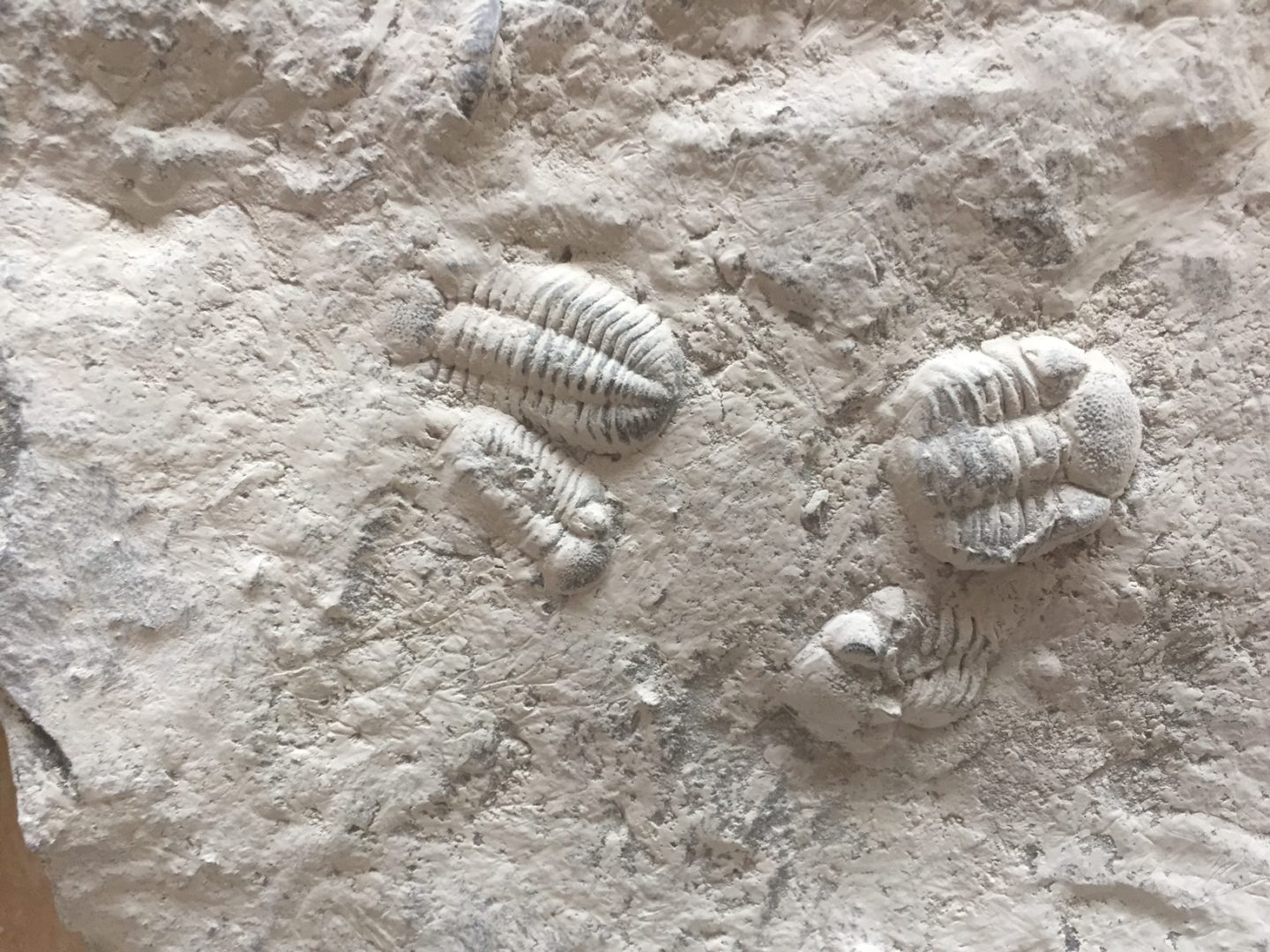 A triple Phacops (the larger prone specimen is ~ 1.25 inches long). [The plate looks whitish because of a thin coating of rock dust from being cut by my saw.]

For the Dig this year, special THANKS go to Phil Stokes (Penn Dixie Executive Director), his skilled staff, all the volunteers, and importantly the great food trucks [this year it was grilled cheese (Saturday) and meatball subs (Sunday)]. And an especially hardy thanks to Dan Cooper for directing the excavation prior to the Dig.

The Dry Dredgers will be visiting Penn Dixie in June for a club field trip. In addition to club trips to the park, you might want to consider becoming a Penn Dixie member so that you can visit throughout the collecting season.