In a previous blog, I introduced the vast array of fossils that are available at the Tucson Show (late January-February). I thought it might be of interest to share the new specimens added to my collection as a result of the 2016 show.

In that previous blog, I mentioned a room full of Russian trilobites — hundreds of caramel-brown “bugs” representing a couple dozen species. In that vast array was a small grouping of enrolled specimens of Asaphus (Ordovician, Asery Level, St. Petersburg region, Russia). From that limited selection, I cherry-picked a few nice ones. While Asaphus is a fairly common genus, historically most of them at the show are prone on matrix. I’ve seen relatively few quality enrolled specimens. So when they do appear, I grab them. 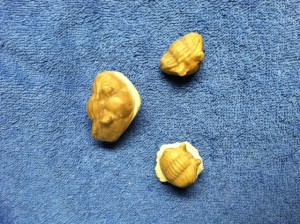 Of course, not all species of fossils are so abundant as Asaphus. Some are much rarer, and limited numbers of them appear at the show. This year, I was fortunate to get two really fine unusual pieces.

One is a crinoid from Canada (Daedalocrinus, Ordovician, Bobcaygeon Formation, Brechin, Ontario, Canada) on a slab. The crown is nearly 2.5 inches tall with nearly 6 inches of attached stem. While many crinoids have been found in this quarry, the ones I’ve seen available for acquisition have not been as well preserved and 3-dimensional as this one. So without much hesitation, I grabbed it. 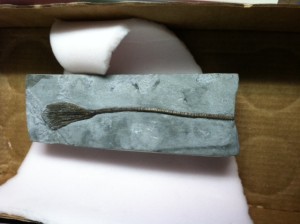 The other fine piece is a plate of four cheirurid trilobites (Gabriceraurus mifflinensis, Ordovician, Platteville Formation, Mifflin Member, Grant County, Wisconsin). Two of them are dorsally exposed prone specimens, one is a ventrally exposed prone bug (revealing the hypostome), and the fourth one is enrolled. The prone specimens are approximately 2.75 inches long! That’s big for the species. Also, this is not a particularly common trilobite, so to find a cluster of four is remarkable. 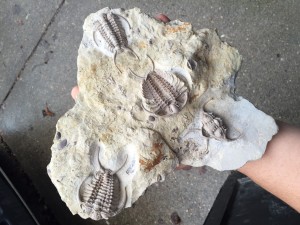 While there are indeed an incredible number of specimens available at the show, the rarer and higher quality material tends to disappear pretty quickly. So I always arrive early and make the rounds of the fossil dealers (at three different locations in the city) as soon as they open. While there are still plenty of fossils throughout the entire event in Tucson, my advice is to get there early for the good stuff.

I’ll bring these specimens to the February Dry Dredger meeting (Friday, February 26, 2016) for show and tell. [Sorry, no free samples.]

So if you want to expand your collection, the Tucson Show is definitely a place to do that. There is no admission fee, at least to the many venues I’ve visited. Thinking ahead to the 2017 show, if you want information on where to find the fossil dealers at the show, glad to assist. And I’ll mention again that the winter weather in Tucson is far better than what the Midwest offers.